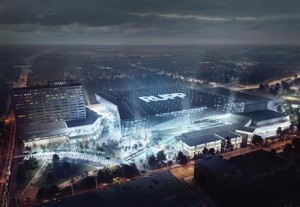 Rupp Arena will be modernized as a stand-alone facility with a glass-and-steel appearance that state and local officials promise will improve accessibility and comfort for Kentucky basketball fans.

Lexington city officials on Monday revealed the long-awaited redesign of the 38-year-old home of Wildcats men’s basketball, with an estimated $310 million budget including $65 million in state bonds. The project is expected to be completed by fall 2017.

The new design will separate Rupp from the adjoining convention center and replace its enclosed beige facade with windows, which Mayor Jim Gray says will allow views from inside and outside the building. It adds a center-hanging scoreboard and chair backs throughout, a reconfiguration that university deputy athletic director DeWayne Peevy says could include creation of club suites to retain its capacity of 23,500.