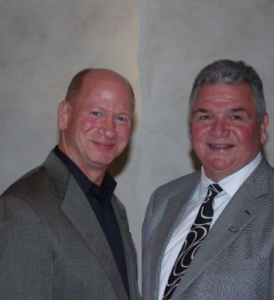 The National Association of Concessionaires (NAC) has announced that John Irace, CEO, and Tony Irace, President, of Packaging Concepts, Inc. (PCI) have been selected as the 2016 Bert Nathan Memorial Award Co-Honorees. The award designates active involvement in NAC, providing positive leadership direction, significant contributions to the development and professionalism of the concessions industry with significant accomplishments and longevity to the theatre concessions industry and current, active involvement in theatre concessions at the executive level. They will be presented the award at the CinemaCon All-Industry Award Breakfast scheduled for Tuesday, April 12 at 7:30 AM at Caesars Palace in Las Vegas.

After being notified of the accomplishment by NAC President Terry Conlon, ECM, John Irace expressed his appreciation. “Thank you and the NAC contingent for this prestigious award,” said John, “We are both honored and humbled to be recognized.” Tony Irace shared similar sentiments. “We are truly honored and humbled to be this year’s award winners, and look forward to celebrating with you in Las Vegas. We will have the award proudly displayed at the PCI offices!”

PCI, a distributor selling food-service and industrial packaging products, has always been a family business. The company was incorporated in 1972 by their father, Joseph Irace, in Lake Geneva, Wisconsin. John started at the business full-time in 1975. The company moved to St. Louis in 1982 and Tony joined the company in 1985. Their sister Barbara also joined the company in 1984. All eight of the Irace children have contributed to PCI in some way. In 1999, John, Tony and Barbara purchased PCI from their father and continued to grow it.