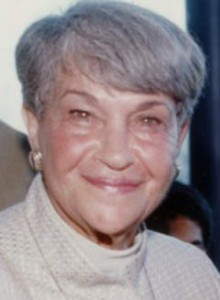 The matzo balls were as hard as a finger-breaking Chicago softball.

The chopped liver was made from beef instead of chicken.

Eadie Levy had her work cut out for her in 1978, when her sons, Larry and Mark, called her in her native St. Louis for help. They had to. Patrons at their first restaurant, D.B. Kaplan’s deli at Water Tower Place, were making comments like, “Are you gonna kill me with that food?”

The kitchen turnaround was dramatic. “Within two weeks after my mom got there, people were saying, ‘Wow!’ This food is great,’ ” Larry Levy said.

D.B. Kaplan diners couldn’t get enough of her noshes. And they loved the way she remembered their names, asked about their families and doled out advice.

Employees found they could always go to Mrs. Levy with a problem. Quietly, she did good deeds that her sons are only now finding out about. Mrs. Levy died Aug. 28 at her Michigan Avenue condo at 92.

“There was a woman who struggled to keep a job, and my mom paid for her dental reconstruction, because she thought that might be the problem,” Larry Levy said.

“Her morals and values became the culture of the company, which became an international company with 25,000-plus employees,” he said. “Great companies have a great culture, and the culture began to revolve around my mother. People could see Mark and I came from a nice person. People were treated with absolute dignity.”

She was born in St. Louis, the youngest of eight children of Frieda and cobbler Hyman Aftergut, both from Galicia, Poland. Their house — about 1,200 square feet with one bathroom — was a hive at the center of a loving, extended family. There was always an extra aunt or uncle bunking there.

Only one alley separated her from a boy named Paul Levy, who was handsome and ambitious. At 18, they wed. They honeymooned in Memphis and went to Beale Street, where music giants prowled and performed.

They moved to Berkeley, Calif., and took jobs in factories, but soon he was drafted into the Army. He was a “litter bearer,’’ bearing bodies on stretchers away from World War II combat zones. He also participated in the liberation of European concentration camps.

At one point, while in the U.S., he went AWOL and drove all night to get a glimpse of Larry, his eldest son, whom he had never met. He made it back to his base without getting caught, but he didn’t see his family again for 2 1/2 years, Larry Levy said.

“I remember him talking about Ike and Tina [Turner], the problems they had,” Mark Levy said. “He always talked about how difficult their life was, getting along with each other.”

But one performer was very special. After meeting him, Mrs. Levy thought Elvis had superlative talent and charisma.

Mrs. Levy and her recipes were her husband’s secret weapons. She pampered celebrities with marinaded brisket or ribeye, and kasha, knishes and blintzes. “She cooked for Paul Anka at our house, Eydie Gorme and Steve Lawrence,” Mark Levy said.

But at 42, Paul Levy began to have health trouble. A childhood bout with rheumatic fever had damaged his heart. Later, he had a stroke and developed Parkinson’s disease. Mrs. Levy, who had never even written a check, had to go to work.

“She only worked the last half of her life — and never retired,” Larry Levy said.

In fact, up until June, she was still hosting at Fulton’s on the River.

She was queen of her namesake restaurant, Mrs. Levy’s Delicatessen at the old Sears Tower, where she warmly greeted patrons. There, she was photographed with Oprah Winfrey, Michael Jordan and Steven Spielberg. “She had her picture taken with four American presidents,” Larry Levy said. Even after the restaurant was sold and started operating at Urban Market in the Chase Tower, the new corporate owners asked her to keep coming in and welcoming people one day a week.

Until two years ago, she walked the 20 or so blocks from home to Mrs. Levy’s Deli. And only six months ago, she remodeled her condo.

As some relatives scattered to other cities, she kept the family together. If an invitation arrived for a wedding or bar mitzvah, “She was the first to RSVP and say, ‘Larry and Mark, c’mon, we’re going,’ ” Mark Levy said. Today, he is CEO of Mastro’s, a national steakhouse chain, and Larry Levy is chairman of Levy Restaurants.

Paul Levy died in 1980. Her second husband, Bob Abrams, succumbed to Alzheimer’s. In addition to her sons, Mrs. Levy is survived by nine grandchildren and 15 great-grandchildren. Services were held Monday at Cafe Spiaggia.