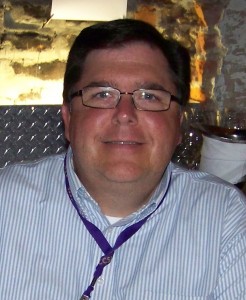 NEW ORLEANS–(BUSINESS WIRE)–Southern Theatres, LLC. announced today that Ronald Krueger II has been named President and COO of the company. Krueger, who has been with Southern Theatres since 2008, has served as Chief Operating Officer since 2009. In his role as COO, Krueger was responsible for daily theatre operations, training, as well as marketing and concessions initiatives.

“Ron has proven himself time and time again in every facet of the departments which he is in charge of. I am very happy and excited that he will continue to lead with more authority and greater latitude in his areas of responsibility. His strong leadership has proven to be a significant reason as to why our company continues to grow and we look forward to greater growth in the future with his guidance,” said George Solomon, CEO of Southern Theatres, LLC.

In his expanded role, Krueger will oversee the operations of VSS-Southern Theatres which includes The Grand Theatres, AmStar Cinemas, GrandLuxeTheatres and The Theatres at Canal Place, totaling 19 locations and 289 screens. Additionally, Krueger will spearhead Southern Theatres, LLC.’s continued expansion plans, with construction of one new theatre in the New Orleans market in November 2013 and two more in 2014.

Krueger has over 25 years of experience in the film exhibition industry, with a prior tenure at St. Louis, MO based Wehrenberg Theatres. In addition to his service to the movie industry, Krueger serves on the advisory board of the National Association of Theatre Owners (NATO) and on the boards of several charitable organizations including Shriners Hospital for Children in St. Louis, and U.S. Variety, the Children’s Charity. Krueger also served on the board of the National Association of Concessionaires (NAC) from 1995 – 2013. He just completed his tenure as Board Chairman and was president of the association from 2009 – 2011.

Krueger holds an MBA from John M. Olin School of Business at Washington University in St. Louis, Missouri and a Bachelor of Science in Finance and Real Estate from Indiana University in Bloomington, Indiana. In 2011, he received an Honorary Doctorate in Foodservice from the National Association of Food Equipment Manufacturers (NAFEM) and in 2004, the National Association of Concessionaires (NAC) awarded him the Bert Nathan Memorial Award “for outstanding service to the movie theatre concessions industry.”