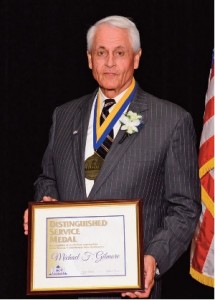 The medal is awarded to NCSA members who have committed years of service, dedication and hard work on behalf of the Association.

A 2001 Candy Hall of Fame inductee, Gilmore has worked in the industry for more than 40 years, holding positions including management and executive positions for Standard Brands, Inc. as well as CEO for Rowntree, Ltd., USA in the 1980s. He has also held the positions of COO and director for Ferrero USA, Inc. from 1988 through his retirement in 2007. Gilmore served as Association President from 2007 to 2009 and Chairman from 2009 to 2011. In addition, he was Chairman of the National Confectioners Association in 2009 and 2010.

Mark Antonucci, NCSA chairman, says: “This award recognizes Michael’s outstanding service to the NCSA. As president, and later chairman, he led from the front, helping the Association transition through a challenging period. He was instrumental in advocating long-term plans and adherence to the principles of the Candy Hall of Fame.”

Accepting the award, Gilmore thanked industry colleagues, saying: “Having now spent more than 40 years in this great industry, I have been blessed to have worked with and befriended many individuals. They have been truly inspiring to me in my work and leadership roles, as they give tirelessly to improving the industry and raising the tides of the confectionery category globally.”