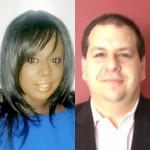 The National Association of Concessionaires (NAC), is proud to announce that Tish Hardric of Great Western Products and Adam Gottlieb, ACS of CCSI have been named the co-recipients of the inaugural Krystal La Reese-Gaule Membership Award. The annual award is presented to the member who sponsors the most new NAC memberships during the most recent fiscal year.

A plaque and a free registration to the annual NAC Concession & Hospitality Expo will be awarded to Tish and Adam at the Annual Membership Luncheon on Thursday July 17th. The award will be presented by Brian Taylor, CEO of Kernel Seasons, who is sponsoring the award for 2014 in memory of Krystal. The Expo is slated for July 15-18, 2014 at the Denver Marriott City Center in Denver, Colorado.

Tish Hardric, although only a member since August 2013, has been an extremely active and valuable member and advocate for the Association. During that short time, she has sponsored an amazing 12 new members.

Adam Gottlieb began his participation with NAC in 2004 by sponsoring the Al Lapidus Golf Tournament and has been a member since 2005. He currently serves as an officer on the Board of Directors and is also the Al Lapidus Golf Chairman. He has been an active sponsor of the annual convention, Regional Seminar Series, Al Lapidus Golf and NAC Website. Adam received his accreditation in December 2010 and has sponsored 20 new members during his career.

The new award is established in memory of former NAC Board Member and industry friend Krystal La Reese-Gaule, who passed away due to illness in early 2013. As an active NAC member since 1996 and a great advocate for the Association, Krystal had sponsored numerous new members for which she received the Ruby, Sapphire and Four-Point Diamond pin designation. At the time of her passing, she was on the verge of reaching Double Diamond status, a designation that only a few have achieved in the history of NAC. Following a career in concessions management with GKC Theatres, Krystal joined Kernel Season’s popcorn seasoning as its National Sales Manager in 2005. Known for her warmth, contagious smile and outgoing personality, she was a natural salesperson and quickly made a name for herself in the concession and movie theatre industries.