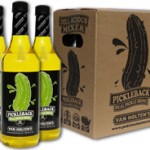 Waterloo, WI – June 2nd, 2014. Known for unique products Van Holten’s is doing it again. Pickleback – Real Pickle Brine is a 32 oz. bottle of dill pickle brine for use as a shot chaser or cocktail mixer. “We are using real honest pickle brine” stated Van Holten’s President, Steve Byrnes. “This is the same stuff we’ve been making for over 100 years using our original recipe”. “We’re just packaging it in a new way to fit the needs of our customers”.

Van Holten’s V.P. of Sales Eric Girard says: “There has been a buzz around pickleback drinks for years now and after watching bartenders trying to pour these shots from murky jars of pickle slices and seeds, we realized that we can make this much better.” Van Holten’s Pickleback – Real Pickle Brine provides users a consistent, easy to use, mess free option for pickleback shots. It also makes adding brine to Bloody Marys, Beer, Pickletinis, or any other cocktails simple. It goes on sale in June and Van Holten’s has received interest from several national customers. They have also already received orders from the largest liquor store chain in Texas, Spec’s.

About Pickleback
A pickleback is a type of drink where a shot of liquor is chased by a shot of pickle brine. The brine helps neutralize the taste of the liquor and the burn of the alcohol. Popularity of the drink has exploded in recent years and can even be found in Europe and Asia. The Pickleback has several aliases including “Piskey, “Piskey Whickle”, “Bartender’s Handshake” and the “Shot Eraser”. Learn more about Van Holten’s Pickleback – Real Pickle Brine at www.picklebackmixer.com

About Van Holten’s
Business has been booming for Van Holten’s who has enjoyed 12 consecutive years of sales growth. Founded in 1898 the pickle company employs 70 people in Waterloo, WI. Famous for their Pickle-In-A-Pouch and recently added Big Papa Dill Pickle Popcorn, their products are distributed in all 50 states and Canada and can be found at convenience stores, grocery stores, liquor stores, concession stands, and many other retail outlets.