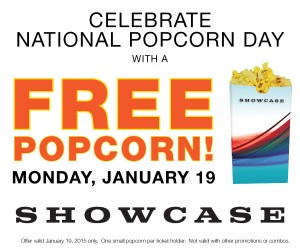 NORWOOD, MA; January 15, 2015 – National Amusements today announced that all of its Showcase, Multiplex and Cinema de Lux brands will offer free popcorn all day on January 19, in celebration of ‘National Popcorn Day.’ All patrons who purchase a ticket either online or at the box office for Monday, January 19, will receive a free 85 ounce popcorn.

“Popcorn is a staple at the movies; it’s one of our most popular snacks,” said Amber Stepper, vice president, marketing & advertising, National Amusements. “Giving away free popcorn on its nationally-recognized day is our way of celebrating one of America’s choice snacks with those that matter most to us – our customers. We expect that we’ll give away approximately 100,000 bags of popcorn.”

According to the National Popcorn Board, popcorn is America’s favorite snack food, by volume, and is one of the oldest snack options for movie-goers; the light, buttery treat has been sold in theatres since 1912. It’s been stated that Americans consume about 16 billion quarts of popcorn each year, equating to about 52 quarts per person.

The following National Amusements locations will be offering free popcorn on Monday, January 19: