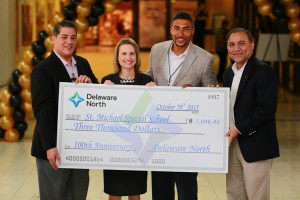 Here’s a look at a few more of the special celebrations recently held by Delaware North locations to mark the company’s 100th anniversary. More celebrations will be profiled each week during the 100-day anniversary celebration through early December.

Delaware North’s team at Alice Springs Airport in Australia celebrated the company’s 100th anniversary by organizing a luncheon session. The event was held for members of organizations based at the airport, including the management team, airline carrier Qantas, security services, the airport’s fire and rescue team and the flying doctor service members who serve remote Australian communities.

Delaware North’s team at Rexall Place (Edmonton, Alberta) celebrated the company’s milestone birthday with a commemorative 100th anniversary cake after enjoying a buffet prepared by the in-house culinary team. What’s more, along with the client at the venue, Northlands, Delaware North held a food drive to benefit the people of Edmonton.

Past and present Delaware North associates (pictured at right) enjoyed reminiscing during a privately-catered celebration at American Greyhound Racing in Phoenix. Among the attendees was Ron Sultemeier, director of new property planning and projects for Delaware North’s gaming division, who once held a leadership post at the location. A plethora of company and unit-specific memorabilia was put on display for the roughly 40 attendees, but one associate even brought her own photo album and collection of employee newsletters.

Along with participating in the “100,000 Cans of Care” campaign (highlighted in recent editions of 360), associates at the Delaware North-owned-and-operated Wheeling Island Hotel-Casino-Racetrack in Wheeling Island, W.Va., have been celebrating by giving guests a chance to win a trip to one of several company locations or free-play at the gaming venue. The latest winner was Nathan Cooper, who opted to take the $2,000 free-play option at the casino instead of the trip.

With live music setting the tone at Louis Armstrong New Orleans International Airport, Delaware North associates, the airport client and guests were treated to a buffet-style lunch, complete with an anniversary-branded cake. Delaware North’s leadership team at the airport – under the direction of General Manager Sayed Mekhemar – then presented a $3,000 check to St. Michael Special School, which attends to the special needs of both children and adults. Pictured at right (from left) are Director of Aviation Iftikhar Ahmed, St. Michael Special School principal Tish Sauerhoff, joint venture partner Edgar Chase and Mekhemar.