How an Obsessive Movie-Goer Reinvented the Theater’s Favorite Food 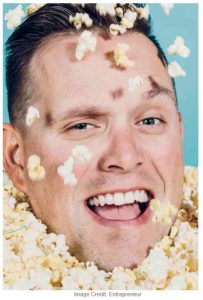 Bric Simpson was a genuine movie buff. He hit the theatre about five times a month. That also made him attuned to the finer points of snacking, and he had some problems. In 2009, Simpson and his wife were shaking a popcorn bucket when she said, “You know what we need?, a lid.”

Today, Simpson has made that lid – along with a company, Kernel King, that sells about 100,000 of them a month nationwide. But the process wasn’t easy. He had to jugle his business while working full-time for the Army National Guard, and he needed to figured out how to break into the theatre industry. But now he has,Simpson’s next goal is a big one: He wants his lids to be as ubiquitous as popcorn itself.