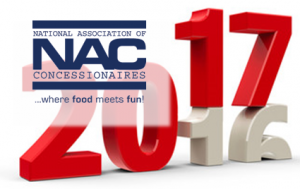 A year ago, we closed out 2015 with a Holiday-style letter that reviewed the year that was and previewed coming attractions. It proved to be quite popular with you, our valued members, so we decided to do it again. 2016 was another standout year for the National Association of Concessionaires (NAC) as members continue to embrace the evolving marketplace by being increasingly active in NAC. The result is that THE trade association of the recreation, leisure-time food and beverage concessions and hospitality industry is as vital and vibrant as ever. It can never be said enough that none of this would be possible without the support of our members, sponsors and a very active Board of Directors. Details on each of following items can be found on Naconline.org.

Where Food Meets Fun – NAC unveiled a new logo which features a freshly adopted tagline, “Where Food Meets Fun.” The tagline was adopted during the NAC Concession & Hospitality Expo held July 19-22 in Minneapolis, MN. Members selected the eventual winner as part of a contest developed by the NAC Outreach Committee. The goal was to find a sentence or phrase that accurately and succinctly captures the essence of the Association, its members and value relevant in today’s industry environment. The tagline is now featured with the NAC name, logo and other communications.

CinemaCon – NAC continues to develop a strong relationship with NATO as an Official Sponsor of this ever-expanding exhibition industry event. The Association has built a full agenda in Las Vegas which included a well-attended seminar on the Dine-In Movie Theatre trend. Other features included The Bert Nathan Award Ceremony, meeting room space for our members, educational programming exclusively for concessionaires and a variety of networking events. CinemaCon 2017 will take place on March 27-30 at Caesars Palace and plans are already well under way.

The Al Lapidus/Variety Boys & Girls Club Scholarship Golf Classic – The 2016 Classic was held for the second straight year at Bali Hai Golf Club and once again featured strong support from both golfers and sponsors. The annual event raises funds for college scholarships for the Variety Boys & Girls Club of East Los Angeles, the Will Rogers Motion Picture Pioneers Foundation, and the educational programs of the National Association of Concessionaires. The 2017 event will take place on March 27 and registration and sponsorships are now available.

CCM, ECM and ACS Certification – NAC Educational programs are more than just for show. The Association held Concession Manager Certification (CCM) training sessions at the NAC Expo in Minneapolis and an International version in Santiago, Chile. The result was scores of new industry professionals sporting the CCM designation next to their name and title as they improved the tools and skills needed to manage a concessions program efficiently and profitably. The next CCM training will take place in Atlanta, GA on February 13-16 and will once again be offered at Expo. An online version is being piloted in the first semester of 2017 in cooperation with the University of Memphis Kemmons Wilson School of Hospitality and Resort Management. The online course is expected to be ready for wider participation in the second semester.

Many members took advantage of the Accredited Concession Supplier Certification (ACS) program that was held for the first time at NAC Expo. This is a one-day seminar that teaches suppliers how a concession operator thinks; the priorities, service objectives and challenges of concessionaires; and how a supplier can be a partner in meeting those needs and objectives. The next edition of ACS training will happen at the NAC Expo in Scottsdale.

The Executive Concession Manager Certification (ECM) program held a class in Minneapolis and is scheduled to do so again in Scottsdale. The one day course, which is highly interactive, builds upon the basic CCM course while providing specific tools and concepts that are needed at the executive level.

International Education Programs – Etter and NAC President Terry Conlon, ECM, traveled to Buenos Aires, Argentina in November to present three seminars to Vista, the 7th Regional Convention of the Cinematographic Industry operated by Ultracine. The Seminars included: Concession Design, how it can make your cinema more profitable; Producing Professional Promotions, how using retail options, cups and toppers can build sales and higher revenues; and Concession Stand Operations Today and Tomorrow, the current state of concessions that are efficient and what the next trends and opportunities will look like. Etter and other NAC members also participated in CineAsia University in Hong Kong in early December. This was a series of seminars that brought together some of the leading experts within the field of cinema concessions and promotions from around the world.

Honors and Awards– The Association once again honored the best and the brightest in the industry.

For the second time in his career, Adam Gottlieb, ACS, EVP Sales and Procurement for Continental Concession Supplies, Inc., accepted the annual Krystal La Reese-Gaule Membership Award. The presentation took place during the NAC Expo on July 21 in Minneapolis.

Industry Affiliations – The association continues to strengthen ties with related industry groups. Of note was an address given at Art House Convergence where we were invited to present fresh ideas and concession industry perspectives.

Government Relations – In what can best be described as a tumultuous election year, NAC Government relations efforts continue to work with other allied industries and associations on the important legislative and regulatory issues.

Armed with a new Three-year Strategic Plan, we look toward 2017 with a sense of adventure and a thirst to grow our membership and enhance our value to the industry. We are working on several projects in the background to strengthen our ability to manage a growing and vital organization, as well as continue to improve our daily communications via naconline.org, NAC Weekly News and Social Media presence on Facebook, LinkedIn and twitter.

As always The NAC Board and Staff are here for you and invite you to take full advantage of your membership and encourage others to join.

Have a very prosperous, safe and Happy 2017!