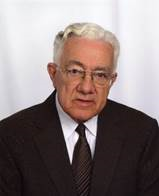 It is with heavy hearts that Gold Medal announces the passing of J.C. Evans. On Friday, September 6, 2019, he passed away at the age of 88. The entire Gold Medal family mourns his loss. And our deepest sympathies are extended to the Evans family.

A pillar in the concession industry, J.C. Evans was known and well-respected for not only his accomplishments, but his uncompromising character. Throughout his life, he was passionate about his work. He began his career in the family business at Gold Medal in the 1940s unloading 100-pound bags of corn. And he joked that he only weighed 130 pounds at the time. He went on to graduate from the University of Cincinnati, and completed a two-year tour of duty with the Army’s Counterintelligence Corp in Europe. In his 20s, he was a salesman, selling popcorn machines and calling on dealers across the country. J.C. was promoted to sales manager, then vice president, and eventually chairman. He gained many relationships with colleagues through his involvement with the National Association of Concessionaires, the Outdoor Amusement Business Association, the International Association of Amusement Parks and Attractions, and the Gibtown Showmen’s Club. Throughout his career, he earned multiple awards. He was the first to be awarded the OABA’s Pioneer Award. He was also honored with both the NAC Bert Nathan Memorial Award and the Mickey Warner Award. Once called vigorous and direct, J.C.’s nature was part of what made him such a skilled businessman. Under his leadership, Gold Medal saw years of innovation, prosperous growth, and profitability.

CEO and Chairman of Gold Medal, Dan Kroeger expressed his condolences stating, “J.C. Evans was a one-of-a-kind, no-nonsense leader. He knew how to push you to work hard. His tenacious style may not have always been appreciated by everyone, but the results spoke for themselves. I learned a lot from J.C. about what it means to have a solid work ethic. I respect him as a colleague, mentor, and friend. He will be greatly missed.”

Editor’s Note: NAC and the entire industry extend its thoughts to the Evans’ family, friends and Gold Medal Products associates at this difficult time.