The Family that Built a Ballpark Nachos Monopoly 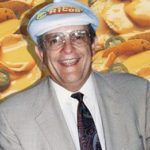 Anytime you order nachos at a sporting event, there’s a good chance they came from a molten-cheese empire in San Antonio, Texas.

Ballpark nachos are a concession stand staple. At Rangers games alone, 600k orders were sold last year, or 1 for every 3.5 fans. For all of Major League Baseball, that statistic would translate to ~13m orders.

And for every order, there’s one key figure to thank: San Antonio businessman Frank Liberto.

Decades ago, he added a twist to a popular Mexican appetizer and originated the concept of the ballpark nacho. If you’ve purchased nachos at a sporting event or a movie theater, odds are you’ve bought chips, cheese sauce, or jalapeños from the Liberto family’s longtime business. CLICK HERE TO READ ENTIRE STORY