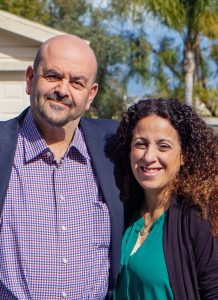 The 2019 Geneva Convention is proud to honor George and Marianne Abiaad with the Ben Marcus Humanitarian Award. This award represents an individual who is a successful leader within their industry, devoted to their family, and always committed to their community. With a guiding principal to simply do what is right, they selflessly contribute their time and resources to charitable organizations and support those who are disadvantaged. They have created a legacy of public service, which will enrich their community for generations to come…just like Ben Marcus.

The 2019 NATO WI/UP Geneva Convention will be held on September 17-19 at Grand Geneva Resort & Spa in Lake Geneva, Wisconsin.

The collapse of Lebanon into Civil War in 1975 meant that George Abiaad would spend his teenage years defending his family, culture, and way of life. Marianne Abiaad lived her formative years in a Lebanon marked by the sound of gunfire, studying by candlelight, and at many times displaced from her home.

Having seen the worst in humanity and his land ruined, George leveraged the optimism that comes from faith in God and came to America. Landing in California, he paid his tuition for degrees in math and philosophy/logic by starting a night cleaning business that focused mostly on churches and movie theatres.

Falling in love with America and the American ideal, and seeing an opportunity, in his early twenties George sold his successful cleaning business and started a commercial supplies distribution company. With a business model that focused on people and a unique view towards market and client customization, Royal quickly grew, forming deep relationships in the movie theatre segment.

On his single return visit to Lebanon, George met Marianne. Their long-distance relationship blossomed into marriage. Marianne came to America and furthered her studies by earning her Masters in Graphic Design. Marianne joined Royal, initially intending only to briefly help out, and her personal touch and energetic drive made an immediate impact. Together, in business and life, George and Marianne became a beloved, single entity famous for their generosity, hospitality, conspicuous gratitude, and individual touch. The Abiaads, married for 25 years, have three kids: Kaylie (9), Geo (3), and Gia (3).

Royal’s growth mirrored that of its exhibitor customers. The company became a national distributor able to increase its already uniquely high service levels and now enjoys a market segment penetration atypical of any distribution company.

The success of Royal has enabled the Abiaads to use their influence to profoundly impact individuals and organizations. Whether it’s service organizations, their church community, employees, vendors, or customers, people who interact with George and Marianne testify that what separates them is their personal touch. Never drawing attention to it, George and Marianne invest time and resources in the lives of their employees, customers, and community. Decades of notes of encouragement, middle of the night hospital visits, long phone calls, counseling, and good-will has impacted an entire industry and family of employees.